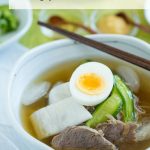 Mul Naengmyeon (Korean Cold  Noodle Soup) is the BEST summer food – light chewy noodles in an icy cold broth that cools you down like no other.  I share 2 versions: our family’s true Northern style Pyeongyang Naengmyeon and the more common Southern style which is sweeter and tangier.

Mul Naengmyeon is a Korean cold noodle soup that’s usually served icy cold (almost as a slushy) in the summer in Korea. But did you know that originally it was eaten in the winter time in North Korea (where my parents are originally from)?? Mul Naengmyeon has a special place in my heart because it was something our whole family loved and had quite often.

It was always our regular Sunday lunch menu after we came home from church. And my mom loves it sooo much that she always says she has a separate (extra) stomach for it.. HAHAHA… and so she can eat double her usual amount when it comes to having Mul Naengmyeon!! 😲😲

My Dad always loved a true Northern style Naengmyeon very much too… 😍So.. as you can imagine, I grew up eating many variations of Naengmyeon in our home, at my grandparent’s homes, at our aunts’ homes, at different restaurants.. you name it, I’ve had it all.

So, I guess you could say I’m sort of a snob when it comes to this Korean cold noodle soup dish. And somehow it seems many restaurants just can’t seem to get it done properly. There’s a restaurant in our area that is sort of famous for their naengmyeon (WHY it’s famous, I will NEVER know..) and people stand in a loong line to eat it.

I went their two times (just to make sure I give them enough opportunities) and the second time it was soo bad, I could not finish the bowl. It was just really SOooo sweet and had no other flavor than sour and sweet…

I so wanted to yell at the people eating it – “NOoooo!! this is NOT how Naengmyeon is supposed to taste!!” 😩 Well..that’s why most of the time, I will just not bother to order this dish at restaurants unless I KNOW  they specialize in it – like Wooraeok (in Seoul and in US). But I think this recipe will make both my mom and dad proud…🤩😋

Mul Naengmyeon 물냉면 when translated word for word, it’s ‘water cold noodles’ (mul = 물 = water, naeng = 냉 = cold, myeon = 면 = noodles). It refers to ALL Naengmyeon that is served with cold soup but if you were to order Mul Naengmyeon at any restaurant in South Korea the soup will most likely be served in South Korean style which is sweet and tangy.

UNLESS the restaurant specifically says they specialize in Northern style 이북식 (yibuksik) Pyeongyang Naengmyeon, then the broth will be not at all sweet or sour.

History dates it back to the 17th century Joseon Dynasty to the Northern part of Korea. Noodles were made from 100% buckwheat (maemil 메밀) mostly back then and since these noodles lacked gluten, they were too brittle in a warm broth. But when they tried it in a cold soup and it worked!!

Now, what?? They didn’t have regular flour noodles back then?
No.. wheat is not a native crop of Korea and wheat flour was imported into Korea from China so only the very rich and royals were able to eat flour few hundred years ago. Flour was imported in much larger quantities after the Korean war and now Koreans eat noodles and bread more than rice!

Anyway, during this time, noodles were made either from rice or buckwheat but in the Northern part of Korea, it was hard to grow rice (weather wasn’t good for growing rice) so buckwheat was much more prevalent.

Around late fall,  which is the time of buckwheat harvest, North Koreans also made Dongchimi (Winter Radish water kmichi) and so it was often added to the cold noodle soup. This is how the famous Pyongyang Naengmyeon came about. Hence the name Dongchimi Naengmyeon was used to emphasize the addition of Dongchimi juice.

I share 2 versions (Northern and Southern style) below. Everyone’s preference is different so try making both of my broth recipes and see which style you like. The Pyongyang style may not grab your palate right away but you will learn to enjoy its simple, clean and refreshing flavor.

How to make BEEF BROTH and SUYUK

How to make Toppings for Mul Naengmyeon

In a bowl, put noodles, add toppings (radish, cucumber, pear, egg and beef) and pour broth into the bowl. Add 3-4 cubes of ice. See my serving suggestions above to see what goes well with my Mul Naengmyeon.

Instead of cooking and making your own beef broth (which I think still tastes the best), you can also make the soup by just using a store bought chicken broth. Whaaat?? Yess….🤩This is great when you have no time or just too tired to make it all. And my mom tells me this is almost as delicious as the full beef version, so you know it’s yummy!!

BTW, this quick and easy Mul Naengmyeon will taste very similar to the ones you are likely to have at any Korean restaurant in the US – sweet, tangy and refreshing.

I like using Trader Joe’s low sodium chicken broth but you can use Swanson or whatever your favorite broth is. You can also use the beef broth from above but season it with more vinegar and sugar like below. SEE RECIPE  CARD.

Honestly, even though I love Mul Naengmyeon, I find that it can be a bit boring to eat it just by itself so I like to enjoy them with one of these recipes which makes the whole meal much more satisfying and incredibly delicious.

Here I boiled some samgyeopsal and served it together. BTW, these absolutely beautiful hemp placemats were specially hand stitched by my sister #3 using Korean traditional sewing methods!!! Isn’t she just amazing?? I LOVE these sooo much…❤️ Thank you SIS!!

If you have tried this or any other recipe on my blog then please rate the recipe (☆☆☆☆☆ at top right of the recipe card) and leave me a comment to let me know how you like it! Every 5 star helps me a lot and I also love hearing from you! 😍

My Newsletter
Print
5 from 5 votes 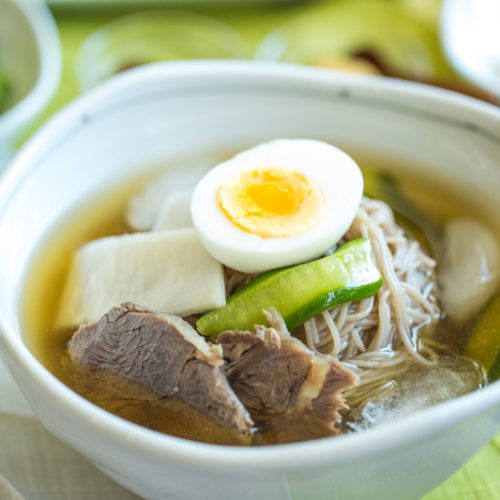 Mul Naengmyeon is the best summer food to have with its refreshingly clean broth. I have 2 different recipe broths - one with a full made from scratch beef broth and another that's almost instant that's ready in minutes.
Prep: 15 minutes
Cook: 35 minutes
Total Time: 1 hour
serves: 3

Pickle Cucumbers - (while you wait for beef to cook)

Make yellow mustard - about 2 tsp powder to 3 tsp water will work. You can also just use a ready-made tube (but not as flavorful).

Cook Noodles - boil a pot of water and add your noodles and cook according to package directions.

SERVING TIME - in a bowl, add noodles, add toppings (radish, cucumber, pear, egg and beef and pour broth into the bowl. Add cubes of ice. Serve with vinegar and yellow mustard. See my serving suggestions above to see what goes well with my Mul Naengmyeon.

** The calories for Noodles are omitted because it was hard to get the info on the noodles without the soup mix. Note, 100% buckwheat noodles are Gluten Free and very low carb. Bonus Recipe - a more tangy and sweeter Seoul style - and you can make the broth in 5 minutes or less! ** If you don't have green plum syrup, just substitute a little more sugar (1 tsp or to taste) and vinegar (1 tsp or to taste).