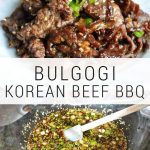 Bulgogi recipe that has been my go-to family recipe for over 30 years!! This most popular Korean BBQ Beef dish is made from marinated thin slices of beef marinated in sweet garlicky soy sauce that is traditionally grilled over an open flame. Enjoy!

Korean BBQ Beef or Bulgogi 불고기 literally means ‘fire 불 meat 고기’ in Korean. It is an amazing grilled Korean BBQ beef dish that will make anyone a fan of Korean food once you taste it. This is the very first recipe that I posted when I started my blog in 2010 and as I said in the title, I have been using this authentic recipe ever since – for 30 years which is basically how long I have been married. 😍

So this Authentic Bulgogi recipe has truly stood the test of time and I am still just as proud and confident about my recipe when I first posted it in 2010.

HISTORY – Bulgogi has its origins dating back thousands of years to the kingdom of Goguryeo (고구려 37 BC – 668 AD) which was in the form of beef grilled on skewers. Later in the 1800’s, with the introduction of metal grates, Koreans started to marinate thin cuts of beef and then grill on top of these gridirons. These were called Neobiahni Gui 너비아니 구이 which actually used thicker slices of beef than what is used today.

Wooraeok still exists today in Seoul. They still cook the beef on the steel pan (see Seoul Bulgogi pic below) and my dad used to add rice and cracked an egg to the juice that accumulated around the rim. And OH MY…you will get a wonderful juk there.. I can still remember how good it tasted and I thought my dad was a genius!!

Traditionally, top sirloin, tenderloin or rib eye cuts (like in the pic above) are considered to be the best cuts for bulgogi and they are thinly sliced across the grain. But if you don’t have a Korean grocery store near by, you can thinly slice a skirt or flank steak or even chuck roast against the grain. The more marbling the meat has, it will be more tender so try to buy meats that have good amount of marbling.

Wrap the meat in plastic wrap and freeze it for 2 hrs or more (esp. if meat piece is bigger than 1 lb) and then take it out of the freezer and slice it thinly against the grain. Pro Tip – always sharpen your knife (like how chefs do on TV) before and it will be so much easier.

Asian Pear is the traditional Korean tenderizer of choice for bulgogi recipes and the rule of thumb is 2 Tbs grated pear for 1 lb of meat. But if you don’t have it, you can certainly use other substitutes and it will be fine.

Rice wine/Mirin/Sake Substitute – Although most of the alcohol is cooked away when you cook, I get asked a lot whether they HAVE  to use it. If you can’t use alcohol in your cooking, try the following: for 2 Tbs rice or red wine =  2 Tbs ginger ale OR 2 Tbs apple juice OR 4 tsp grape juice +  1 tsp wine vinegar + 1 tsp water. Also, reduce the amount of tenderizer (esp. kiwi) if using these since the acidity in these juices or ginger ale may have a slight tenderizing effect.

How to cook Bulgogi

It’s the easiest and simplest way to cook. The pan should be pre-heated on high heat and also don’t crowd the pan by adding too much bulgogi or you will end up with a lot of meat juice in the pan. But if you like bulgogi that has a lot of liquid, which you can mix your rice in (YUM!), then go ahead and cook slow on low heat.

The most authentic and traditional way to cook Korean BBQ (top left pic) is to cook it on an open flame on a charcoal grill or even a gas grill will do. Be sure to use either a fine steel mesh or tin foil to cook the meat over charcoal because otherwise, it will all fall through. You can also use tin foil on a grill and poke holes in them.

You can also broil it on the top rack of your oven (Broil temp) but remember to keep a very close watch so it does not burn!

Bulgogi Pan over a gas burner

Traditional Bulgogi pan over Gas (see pic for Seoul Bulgogi) – Use the classic domed pan on top of a tabletop gas burner and cook with water or light broth added to the rim. The juice from the meat will fall into the water and later make a wonderful juice that you can mix with your rice. Add an egg and swirl it to make the juice even tastier!

Seoul Bulgogi (서울불고기) or sometimes called Yetnal Bulgogi (옛날불고기) is a variation of bulgogi that is made with the same marinated beef but it’s cooked either in a dome pan with a rim on the side that’s filled with water which then slowly gets turned into the most delicious broth as the meat juices drip down into the rim. Like so –

Or, it’s just all cooked in a pot with a broth and different vegetables like cabbage, mushrooms and Dangmyeon noodles. This also goes by Bulgogi Jeongol (stew) and here’s the pic below.

Traditionally, Koreans just marinate the beef by itself but you can add any or all of the following: sliced raw onions, mushrooms (shitake, white, oyster), bell peppers, carrots, green onions can all be added to pan when you cook the meat.

1. Make the sauce by mixing all of the marinade ingredients together except for any optional vegetables such as onions or mushrooms.