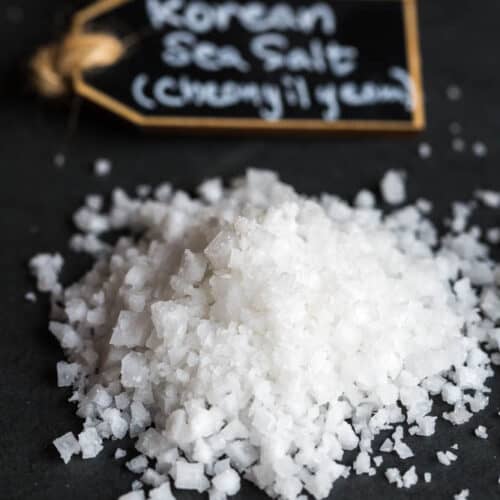 What is Cheonilyeom (Solar Sea Salt) ?

Cheonilyeom 天日鹽 literally translates to 'Sky-Day-Salt' or in other words, Solar Salt or Sun-dried Salt. Korea has always made their salts by using the sea water, then drying them in salt flats for months which produces Solar Sea Salt.

So, these salts have a more earthy and slightly bitter taste than other salts while having lower sodium than most.

There are many sea salts in the world but very few are made naturally by letting them dry on these mudflats using the energy of the sun and the wind.

French Guerande salt and Korean Cheonilyeom are some of the few salts that are made this way and so naturally they have very similar tastes. Many other sea salts are either made using the evaporation method or some other man-made factory methods which are faster to make.

In Korea, up until recently, all salts were made this way and so the term Gulgeun Sogeum 굵은 소금 (Coarse Salt) is used interchangeably with Cheonilyeom. You can read more about Korean salt in my Korea Salt Guide.

Coarse Korean Sea Salt or Cheonilyeom is used for brining kimchi vegetables, for pickling, or when making fermented bean sauces or salting fishes in Korean cooking.

The kind of salt has a large effect on the outcome of these dishes so it is best to use Korean coarse sea salt (Cheonilyeom 천일염) when making these.

Korean sea salt has gained international recognition for its flavor by chefs and gourmets in recent years.

Not To Be Confused With

Common coarse sea salt that's not dried in sun - which are actually how most sea salts are made - unless it specifically says it's dried naturally in mudflats in the sun.

Where and What To Buy

Here's a picture of Chungjeonone brand.

You may also want to look for words like - 바다소금 which means Sea Salt.

Sometimes it may also say 간수 뺀 (Gansu Paen) which means bittern has been removed. The best kind of Cheonilyeom are aged 3 years (3년 묶은) where the salt has been left for 3 years for all the bittern to be removed.

Use Cheonilyeom in everyday cooking. Note, it has less salty than many other salts so you may need to use more of it. But it adds a great flavor to dishes so it's great to use for steaks, fish and where salt is the main seasoning ingredient.

It is also an essential ingredient for kimchi and all fermented bean pastes and other sauces in Korean cooking. If wrong salt is used for Kimchi it can make the kimchi bitter. Read more about salt and Kimchi HERE.

Recipes that use it: