Is summer too hot for you? Do you feel worn out from the heat?? Well, guess how Koreans fix that?! They stand in line for hours in front of restaurants in Seoul to eat a pot of piping hot Samgyetang – Korean Ginseng Chicken Soup!!!

Samgyetang(삼계탕) is probably one of the most popular “energy” foods in Korean cuisine. And some people, like my husband, swear by it. When he has symptoms of allergy (stuff nose, runny nose, itchy eyes and sneezes), he says it’s actually not allergies but it’s because his body is cold inside. Not cold, in the sense of being chilly cold that you need a sweater but cold in the oriental medicine sense. It’s kind of feeling lethargic, weak and tired. Anyway, if he has a pot of this Korean ginseng chicken soup for dinner then he will be all better next day!

Now, if you were in Korea right now in August with 85% humidity with over 30°C/90°F temperatures, you would not enjoy cooking samgyetang at home in the hot summer. And that’s why so many Koreans stand in line in front of restaurants to eat the soup. For at least 3 days of the summer – first day of summer (chobok), middle of summer(jungbok) and last day of summer(malbok) in the lunar calendar – Koreans must eat Samgyetang to beat the heat.

So in support of people back in Korea, we decided to visit a local Korean restaurant in Santa Clara called BN Chicken to get our fill on Samgyetang. If you like chicken, it’s a great place to eat because they have fried chicken, noodles in chicken soup (dak kalguksu) and even chicken katsu. The samgyetang chicken was a little overcooked for my taste but the broth was really hearty and yummy. And their side dishes are all pretty good too.

Back in 2011, I posted a recipe on how to make yeong gye baeksuk.

My Newsletter
Print
4.75 from 4 votes 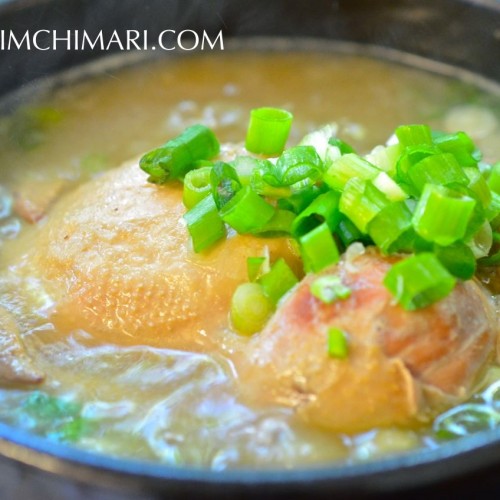 To serve in clay pot, cook in a large pot first and then transfer to clay pot (ttukbaegi) and serve boiling in hot pot. Stuffing sweet rice is totally optional. Kimchi is a must side dish to samgyetang so please try it together.

So where ever you are this summer, I hope you will get to enjoy samgyetang one way or another!

Thank you to BN Chicken for allowing me to take photos of the food. Visit bnchicken.com for info.