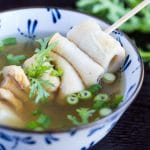 Fish Cake Soup (Odeng Soup) is one of the most favorite comfort food for Koreans. It can be enjoyed by itself or goes wonderfully with bunsik style foods like tteokbokki and spicy bibim noodles.

Fish cake soup is also known as Odeng Guk or Eomuk Guk in Korea. The word Odeng originally comes from the Japanese word Oden (おでん) (‘Japanese one-pot winter dish consisting of several ingredients such as boiled eggs, daikon, konjac (kelp), and processed fishcakes stewed in a light, soy-flavored dashi broth‘ Wikipedia). There’s a slight change in meaning here though.. Japanese Oden refers to the one-pot dish containing fish cakes whereas in Korean culture, Odeng refers to the fish cake ITSELF. Eomuk on the other hand is the pure Korean word, with Eo meaning fish, Muk meaning cake like state, similarly used in the name Dotori-muk.

Interestingly, even though these two soups are basically called the same thing, the Korean and Japanese fish cake soups taste somewhat different. Both soups start with the same basic dashi broth made from dried anchovies, radish and kelp but it is seasoned differently. Japanese style oden soup has a darker color because it’s seasoned mostly with Japanese dark soy sauce and will be sweeter tasting. Korean style eomuk guk (어묵국) is lighter in color and is seasoned with both salt and Korean soup soy sauce (guk ganjang). Both taste good in their own way but with Korean bunsik, the Korean style eomuk guk definitely tastes better together. 😉

What’s in a fish cake?

A high quality fish cake is made mostly from fish meat and sometimes includes ground fish bones. The fish can be sea bream, or other white fish – some seasoning and usually flour as a binding agent. Some fish cakes contain MSG so you may want to check that if that is a concern. The ground fish batter mix is then shaped and then deep-fried. It is then cooled and frozen or refrigerated for distribution.

In my opinion, the best fish cakes are the ones that are freshly made, fried and served right as they come out of the fryer. As a kid I remember following my mom to our local market and tasting the freshly made Odeng that was sold right as the seller was making it. I remember thinking that this tasted sooo different from the ones that comes in packages. Odeng was one of my mom’s favorite snack to have in the car on our way back home from the market.

“It’s funny how this Odeng will not taste as good once we go home and eat it. So we should eat it now, right?”

My Newsletter
Print
5 from 1 vote 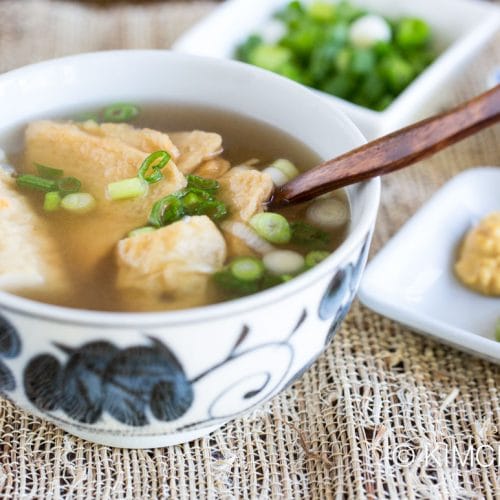 A tummy warming soup that makes you feel so good all the way. This soup stock can also be used to make noodle soups and added to tteokbokki instead of water for extra flavor.
Prep: 3 minutes
Cook: 40 minutes
Total Time: 43 minutes
serves: 6 people

If you can buy uncut Korean rice cakes for soups, you can put them on skewers and cook with your fish cakes. Do not cook the rice cakes too long though since they will start to melt in the soup. Just add it in the last 3-4 minutes of cooking.

Pairs wonderfully with tteokbokki or bibim noodles or yache twigim. Click on the links or pictures below for recipes.