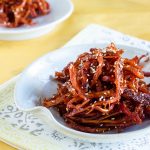 Korean Spicy Dried Squid Recipe or Ojingeochae Muchim (오징어채 무침) is one of the most popular banchan in Korean cuisine. Especially in dosiraks (Korean bento lunchbox). It is also my daughter’s most favorite side dish. Recently, my good friend and best blog follower Judith asked me to post this spicy dried squid recipe. She told me that she wanted to make ojingeochae muchim but said if I was going to post a recipe soon, she was willing to WAIT even though she already bought the ojingeochae. Well, Judith, although a bit late, this is for you. Oh and this is also for my daughter for later, when she decides to make it. 🙂

Ojingeochae Muchim is sometimes also called Ojingeochae Bokkeum (오징어채 볶음). For your reference, the difference between muchim and bokkeum is that muchim means to toss and coat with seasoning and bokkeum means sautéed or pan-fried. And I guess it is called by both names because this spicy dried squid recipe includes both cooking methods – it is first tossed in gochujang sauce (muchim) and then quickly pan-fried (bokkeum).  Ojingeochae (오징어채) literally means ‘julienned squid’ but it somehow always refers to dried squid that is seasoned and cut into thin strips not fresh ones.

Note that these dried squid strips already come seasoned in packages which is great to eat straight from the bag as snacks or with beer! But it often contain MSG, so beware of that if you are allergic to MSG.

When I think back, I think about how, many years ago when I was in school, many of my American friends gave me puzzling looks and questions when I talked about Koreans eating squid. They would say things like –

“What??? You eat squid?? Those sea creatures that look slimy with many legs??? You really eat them??”

But now, thanks to the Italians (calamari) and Japanese (ika), most people seem to be quite comfortable with eating squid. BTW, calamari and squid are actually different – see my post on Ojingeo Bokkeum for more info on nutrition and a recipe using fresh squid.

Still, dried squid is not as well known in the US. It is kind of an acquired taste because the dried squid has a stronger and more concentrated flavor than fresh squids. But once you get over the stinky smell, they are sooo good. The dried squid also goes great with beer so try that sometime!!

Because dried squid is quite hard and chewy, Korean moms (my generation) sometimes gave a strip of dried squid to their babies who were teething (just like you give rawhide to puppies to chew HAHAHA). The salty umami flavor and the texture keeps them entertained for quite a while. Of course, you do have to make sure they don’t choke on it so they have to be constantly watched and it should be taken away once they start to look soft and they can actually bite it off. I’m NOT recommending this at all for today’s ever-so-careful young parents but I’m just saying that’s what our moms did in the old days when they had 5+ kids… Most popular Korean side dish for dosirak (lunchbox) and for everyday meals. The spicy and sweet gochujang sauce is quite addicting when paired with the salty, chewy dried squid. Easy to prepare and keeps well up to weeks in fridge.
Prep: 7 minutes
Cook: 3 minutes
Total Time: 10 minutes
serves: 2

Well, hope you get to make some – it will be a great banchan to have anytime!

PS – I have added ojingeochae to my store if you need to buy online. It’s under Dried Foods category.