Buckwheat Pancake (Memil Jeon 메밀전) is a special local food in the province where the 2018 Winter Olympics is being held. Ready in just 20 min!

Buckwheat pancake Korean style! You may have heard of Buckwheat crepes and Buckwheat breakfast pancakes but you probably have not heard about this Korean buckwheat pancake. It is a specialty in the area of Bongpyeong, Gangwon province, which is also where this years’ Winter Olympics is being held.

If you asked a Korean, they will probably associate Bongpyeong with Memil Jeon, Memil Guksu 메밀 국수 (Buckwheat noodles aka soba noodles) and Memil Muk 메밀묵 (Buckwheat Jelly). Because Bongpyeong produces the majority of Korean buckwheat. And I just found out that this area is only 30 minutes away from Pyeongchang 평창(where olympic village is). You can read my past post Buckwheat or Soba noodle salad to learn more about our visit to the area and their buckwheat festival that we got to see while we were there.

Before we go on, I need to share an almost fading memory I have about Memil Muk (Buckwheat Jelly).

My Memories of Buckwheat Jelly

I’m sure some of you may know the most common type of muk made is from acorns (Dotori Muk) and mungbeans (Cheongpo Muk or Nokdu Muk). Well, when I was a kid living in Seoul, sometimes in the darkness of night, you would hear a song that starts from a far away and then getting closer and closer —

It was a song sung at the top of his lungs, by a street vendor trying to sell his remaining inventory so he could go home to his family. These street vendors walked around in the neighborhood at night, beckoning you to buy their yummy “mu~uuuk~” for a late evening snack. If you are old like me 😜, you may remember hearing these vendors singing in the dark, hanging around outside your door…hoping and wishing that someone would come out and buy their food. Oh boy… writing about those days are evoking a certain feeling of nostalgia as I am suddenly singing their song in my head. 😍 We mostly thought it was annoying at the time but now I kind of long for those days of less machines and less convenience… a memory is always more beautiful than reality, right?? HAHAHA…

A restaurant that’s in my Top 13 Best Seoul Restaurant list, Nurungji Baeksuk 누릉지 백숙 Restaurant in Donamdong 돈암동, serves Baeksuk and Nurungi (burnt rice porridge) and my favorite version of Memil Jeon. The most traditional Ganwondo version of memil jeon has napa cabbage and green onions in them and is served with a soy dipping sauce. That’s the recipe I’m sharing today. There’s another version that uses rinsed sour kimchi instead of fresh cabbage. And then there’s this restaurant’s version which I especially love and I have included that recipe here too! So you are getting two recipe versions for the price(?? yeah, maybe your price of having to endure my ads.. haha..) of one!! This lovely buckwheat pancake is served with some fresh buckwheat sprouts and dolnamul (sedum, stonecrop) on top with some sweet and sour gochujang drizzled on top. I just LOVE the combination.

These little green gems adds freshness and a wonderfully crunchy texture. The chogochujang brings a zing and a zang (my word for a spicy kick!) that just brightens up all the flavors as you enjoy the contrast of the nutty smooth taste of the pancake with the fresh little crisp salad.

YES and YES!!! My recipe only uses buckwheat flour, water and salt for the batter mix which makes it naturally gluten free. And then only vegetables are added so it’s also vegan!

Can I substitute American buckwheat flour instead of Korean to make buckwheat pancake?

Now, here’s one that’s similar to the Nurungi Baeksuk restaurant’s version. Instead of adding cabbage to the pan, I simply added some green onions into the batter itself. This is lot simpler to do :).

And then because I had no buckwheat sprouts, I thought I would simulate the addition of fresh greens by making some pachae (green onion slivers) and then drizzling some chogochujang sauce on it. It was not the same but pretty and delicious!! 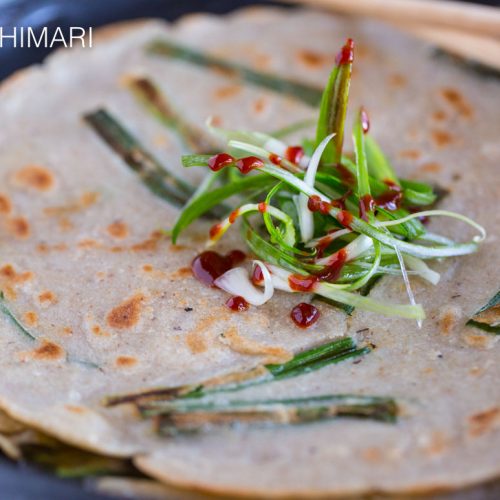 Buckwheat pancakes Korean style! This lovely pancake is savory and not sweet. It is a specialty in the area of Bongpyeong, Gangwon province which where 2018 Winter Olympics is.
Prep: 15 minutes
Cook: 10 minutes
Total Time: 25 minutes
serves: 3 pancakes

American vs Korean Buckwheat flour I discussed above that Americna buckwheat flour is coarser and more gummy tasting. If this is the case, try mixing buckwheat and regular flour 2 to 1. So 1/2 cup american buckwheat + 1/4 cup flour. It comes out pretty good but I have to say not as perfect as the 100% Korean buckwheat flour.

Well, I hope you get to enjoy the Pyeongchang Winter Olympics with these Korean gluten-free buckwheat pancakes!!