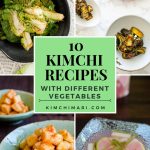 If you like to eat kimchi, you’re probably familiar with the classic Baechu 배추 Kimchi which is the most commonly available kimchi made from Korean cabbage (similar to Napa cabbage but bigger). But I bet you didn’t know that you could make Kimchi using so many other vegetables! I have listed 10 Kimchi recipes here but there’s of course plenty more. I once took a Kimchi making course when I was in Korea in 2013 and the instructor boasted about her Kimchi cookbook that had 117 different kimchi recipes!!
But honestly, I have to say that was a bit of a stretch. In my opinion, the most commonly used Kimchi recipes are more like 30 and I bet most people can only name about 15 if you asked them. Most families will probably have their most favorite 5-6 kimchi recipes that they make throughout the year. Btw, if you are new to Kimchi or want to learn more about it in general, please check out my comprehensive post on how it’s made, how to buy, its health benefits and much more in my 1st post (Kimchi Guide) of this kimchi series.

Besides Cabbage, Korean radish (무 Mu) is another common vegetable used to make kimchi, and I have a couple of simple recipes to get you started. Radish kimchis pair wonderfully with soups like Samgyetang and Galbitang. Oh, I also included in this roundup a couple of vegan Kimchi recipes inspired by Korean temple food, and one of them is made with cucumber. I invite you to try all these 10 kimchi recipes using different vegetables!

A great recipe for the beginner in kimchi making, especially if you have a hard time finding Korean cabbage. Regular green cabbage (the one used to make coleslaw) is a good alternative. Napa cabbage is a close substitute. The great thing is it tastes great fresh or fermented.

The word “Mak” in Mak Kimchi can be translated to “haphazardly, roughly, carelessly”, which means that this is an easy everyday kimchi to make at home. Just cut the vegetables into pieces, mixed with the seasoning, and it should be ready in just a few days.

This is kimchi that can be made in 15 minutes with no pickling or fermentation. Koreans call it “geotjeori” 겉절이, which basically means “pickling just the outside”. It’s instant kimchi that can be enjoyed fresh like a salad. Just toss with the seasoning right before serving.

This interesting recipe uses chili pepper seeds, resulting in kimchi that’s more flavorful, less spicy, and slightly sweet. As an alternative, substitute with red pepper flakes (the ones used in pizza) because they have quite a lot of pepper seeds in them. Unusual but so good!

This cucumber kimchi recipe calls for just a handful of ingredients and happens to be vegan and gluten-free. The crunchy texture and the refreshing taste of cucumbers are perfectly preserved. It’s really the simplest kimchi recipe to make with NO fermented sauces or flour pastes.

Based on a traditional recipe that has been around for generations in the southern part of South Korea, this kimchi is easy to make with minimal ingredients. Korean radish is sweet, crunchy, juicy, and a little bit spicy. It’s a refreshing change from the usual cabbage kimchi.

Cubed radish kimchi is probably one of the most popular Korean kimchi after the classic cabbage kimchi. It only takes 30 minutes to make, so if you want to try something different, start with this! It has a zingy cleansing taste that goes really well with hearty, rich meat soups.

Korean altari or radish is very tender and crisp with almost no pungency. This kimchi is made with the whole radish intact, with the green leaves and all, and there’s no need to make any fancy stuffing. If you like your kimchi with a nice crunch, this recipe is for you.

Water kimchi has a cleansing effect and is usually served as part of a heavy meal to help cleanse the palette between fatty or spicy dishes. The liquid in water kimchi is usually colorless but I decided to add watermelon radish to give it an appetizing pretty pink hue. Try it!

I hope these 10 kimchi recipes with different vegetables make you fall in love with kimchi over and over again. And also check out my Kimchi 101 Guide and 10 ways to eat Kimchi post on how to cook with Kimchi.