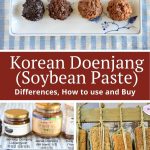 Doenjang (Korean Soybean Paste – pronounced DEN-jahng) is a twin sister to Gochujang that is not spicy and lot more complex in flavor. Probably much less known than Gochujang outside of Korea. But in my opinion, it is one of the most amazing seasoning ingredient in Korean cuisine. Doenjang (된장) is fermented Korean soybean paste that is made by fermenting cooked soybeans with salt for 6 months or more.

Making doenjang requires a lot more work and time than gochujang but you also get a huge depth of umami flavor in return. It also tastes a little sour and salty in addition to its amazing umami flavor.

What is the difference between Korean Doenjang vs Japanese Miso?

They are both made from fermented soybeans and salt. But they have different colors, different ingredients and different flavors. Traditional Korean doenjang is made just from soybeans and salt only. Miso usually is made by adding koji starter to rice in addition to soybeans which produces a sweeter taste. In terms of flavor, I would say the difference in flavor is like comparing American Cheese and blue cheese or parmesan cheese. Miso is milder, smoother and sweeter. Korean Doenjang is stronger, sharper, deeper and more complex in its flavor profile. I am not saying one is better than the other (I love miso too!) they are just different in flavors and their place in cooking.

What do the different names of Doenjang mean on the labels?

I know many who can’t read Korean are probably frustrated that it is hard to tell what the difference is among all the different kinds just by reading their English names. I just came back from a Korean grocery store and realized that the English descriptions are quite confusing and there’s absolutely no consistency. Sorry about this folks…

“Seasoned Deonjang” – this is one word that seems to be somewhat consistently used. But in fact, it can actually be one of two things.

“Classic/Traditional/Original Doenjang” – this is usually one of two kinds. Doenjang made using more modern fast factory methods (Gyerang-sik 개량식) and then the Traditional (Jaerae-sik 재래식) made using slow traditional methods.

More formally, Korean soybean pastes can be divided into three major groups based on the process. *This is purely my categorization. As you can tell, this took some research and thinking on my part.

Here is a sample variety that I grabbed out of my fridge – some lighter, some darker.

Why do Doenjang have different colors? Why do they become black?

Doenjang becomes black when it is exposed to oxygen. Generally, the longer the fermentation, the darker the color. But sometimes it is also due to ingredients used. The top layer always become black but when you turn it over and mix the black part back in, the color will change back to brown because it is no longer exposed to air. So it is perfectly fine to eat Doenjang that has become darker. Traditional Jarae Doenjang with proper amount of salt will never go bad. It can, however, become too dry in which case it is not the best tasting.

If you see in my picture above, there are 4 different kinds – of different colors and age:

What should I look for when buying Doenjang?

I know the chances of you making this wonderful seasoning paste will be pretty slim. Even I have not yet attempted that but someday.. someday… So then this is probably the question that most of you have.

Traditional ingredients will have:

Your store bought Doenjang will probably have at least:

And if it’s made using Factory Method, it will likely will have following:

Both Jookjangyeon and NH brand’s are some of the best authentic tasting pastes with the most complex umami flavors. But these are not very easily available in the US. So during my recent trip to the store, I looked through a lot of soybean pastes and found these two to have the best set of authentic ingredients and good flavor.

LEFT: Baekil Doenjang (백일된장) = ‘100 days soybean paste’ by Sempio. Sempio has been making Ganjang and Doenjang for over 70 years and so they know something about making them. 🙂 No.. I am not paid to say this. I wish!! hahaha..They recently came out with this new product where they say they have fermented the soybeans for 100 days using the traditional slow method. It has great deep umami flavor and is made with just 5 ingredients: water, soybean, salt, alcohol, koji starter. I’m so happy they have this and it’s Gluten Free~!

RIGHT: Jaerae Doenjang by Jayone. Jayone is relatively new to this area and I was happy to see this even in our local regular grocery store. No specific details could be found but the word Jaerae and the ingredients list seem to point to more traditionally made paste. Ingredients: Non GMO Soybean powder, Non GMO Soybean, Wheat flour, water, salt, alcohol. As you can tell from the color, this is a much younger paste with a simpler and smoother taste that’s similar to miso but you may like this better if you are not used to the real strong taste of the authentic kind.

If you make a lot of stews or soups, I’ve found these pastes in recently that are also great to have because it already has a lot of flavors added. ALLERGEN NOTE – these may contain wheat, fish, shellfish or flavor enhancers.

LEFT: Sempio Tojang (토장) – although the name Tojang is used to refer to soybean pastes made using the Classic Fast method (#2 method of 1 to 2 month fermentation), this one by Sempio comes pre-seasoned with seafood seasoning, cuttlefish powder, kelp extract, sugar, onion, garlic and more.

RIGHT: CJ’s Dadam (다담) – this one has become very popular among Koreans recently and has Kelp, Anchovy, Clam extracts, corn syrup, sugar, egg, milk, crab, shrimp and flavor enhancers. If you don’t mind some flavor enhancers, this one does instantly make your stew taste so much better. I don’t use it often but sometimes if I’m lazy or don’t have good stock ingredients, I will use it.

What are the health benefits of Doenjang?

Korean fermented soybean paste has been found to have great health benefits such as anticancer, antimetastatic, and antigenotoxic effects. Here are some actual research:

However, due to the high salt content, one should be careful about consuming large amounts of it.

Well, whew – that was a lot of work but hopefully it was worth it! And hope you make some wonderful Doenjang Jjigae this weekend!