Then you are probably thinking that Sukju must mean mung beans in Korean (and honestly, I almost wrote that not remembering a story I heard many years ago) but it actually does NOT!!!

Well, are you ready for a quick history lesson? If not, just skip the next couple paragraphs.. 😉

Under King Sejong (14th century Joseon Dynasty), there was a great scholar whose name was Shin Sukju (신숙주(申叔舟, 1417~1475)). It is recorded that Shin Sukju was a core contributor in the creation and application of the Korean alphabet Hangul under King Sejong and the King had deep trust for him. When King Sejong died in 1450, he asked Shin and few other trusted officials to protect his heirs and his line of throne because his oldest son King Munjong was very weak and his grandson King Danjong was still very young.

As King Sejong had sadly predicted, King Munjong died from illness in 1452 at age 39 – after only a 3 year reign. And when his son King Danjong became King at the very young age of 12, King Sejong’s younger brother Sejo (who always believed that he should be King) led a coup and succeeded in taking over the throne. Eventually King Danjong was ordered to put to death by his uncle Sejo in 1455. This is one of the most heart wrenching story in Korean history and many Korean historical dramas were made around these times. Queen Insoo (인수대비 Insoodaebi) is one of the many that I enjoyed watching.

After the coup, many of King Sejong’s trusted officials stood up against King Sejo’s take over and ended up losing their lives. However, Shin Sukju quickly professed allegiance to Sejo and was later highly decorated by King Sejo for his many contributions during his reign.

OK.. so.. you are probably wondering.. what does this crazy story have anything to do with mung bean sprouts???

Well – if you have bought bean sprouts from the market and kept them in your fridge for few days, you will know that they change color and go bad pretty quickly. Also, even they are cooked and made into Korean Bean Sprout Salad or Namul, they spoil pretty quickly also. Seeing how the mung bean sprouts change so quickly, Korean people living during the times of King Sejo started calling it “sukju” saying that mung bean sprouts change quickly and easily just like how Shin Sukju changed his allegiance so quickly and easily.

Haha.. so now you know… the rest of the story…

If you have searched for recipes for Korean Sukju Namul online, you probably noticed that many have garlic in it. But my recipe omits garlic. I love the pure simple taste of cooked mung bean sprouts, seasoned lightly with salt and enhanced just a little bit with a touch of sesame oil and green onions. I asked some of my sisters and they agreed that this is the best way to eat it.

Anyway, here is a great Korean Bean Sprout Recipe that you can add to your set of “Namul” recipes – totally gluten free, vegetarian and vegan. And of course, very low calorie. The only bad thing(?) would be that it does change pretty quickly.

My Newsletter
Print
4.78 from 9 votes 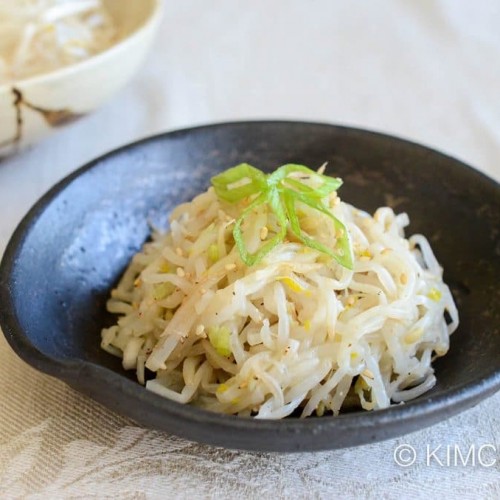 This is a very simple basic recipe. For color, you can add julienned cucumbers and yellow peppers.
Do not leave at room temperature for too long because it spoils easily. Can be refrigerated and served cold or at room temp.