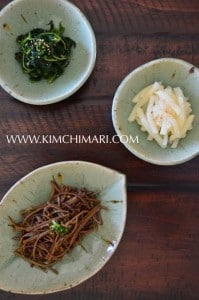 Gosari or Bracken fiddleheads namul has a wonderful earthy flavor and chewy texture that all Koreans love (well most anyway..). It is the brown colored vegetable out of the 3 colored namuls. 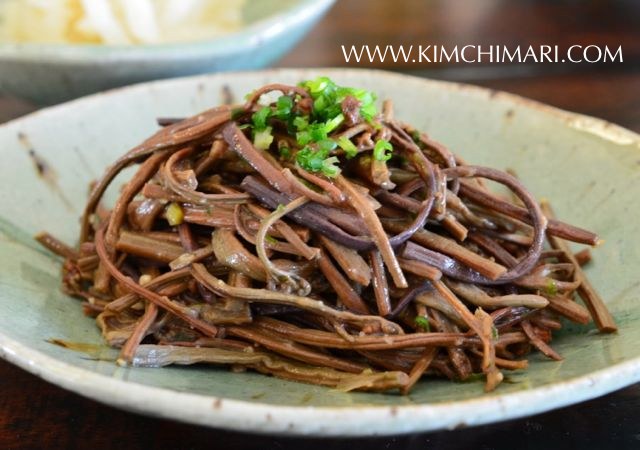 Gosari (고사리)/Kosari or Bracken Fiddleheads namul is the last of the Korean three color vegetables (samsaek namul 삼색나물) dish that I have been blogging about.

What is Gosari or Bracken Fiddleheads?

Bracken belongs to a genus of large, coarse ferns in the family Dennstaedtiaceae. As ferns, brackens do not have seeds or fruits, but the immature fronds, known as fiddlehead greens, are eaten in different cultures. Bracken is one of the oldest ferns, with fossil records over 55 million years old having been found. In Korea, Gosari (고사리) comes usually in dried form and is eaten as a side dish or added to bibimbap, yukyejang or bindaetteok.

It can be but please read more. Koreans have been eating Gosari for centuries but as I was researching about this fern, I found out that this Bracken fiddlehead is a very controversial vegetable. On the one hand, Bracken/Gosari has many health benefits because it is high in protein, vitamin b2 and fiber.

And according to traditional Korean medical books, it says that Gosari can be used to treat fever, insomnia and also can clear the mind. But on the other hand, there are studies that show it increased bladder cancers in farm animals who ingested Bracken fern raw.

There is also a study that say Bracken caused stomach cancer in laboratory mice due to a carcinogen in the plant. And there were even articles that mentioned there may be a link between the very high rate of stomach cancer in Koreans and Japanese and the Gosari being a popular vegetable in both Korean and Japanese diet.

But here are my conclusions:

So, don’t worry too much but just cook Bracken properly and enjoy its wonderful flavor.

Is Bracken bad for men?

I love the earthy flavor and the chewy texture of Gosari but my husband refuses to eat it, so I never got to cook it as often as I would have liked. Why does he not eat it? Not because he doesn’t like the taste, not because he is allergic to it, not because of the carcinogen (as discussed above)…but because he, like many other Korean men, believe in the myth that it reduces their stamina..😝😝

I always wondered if there was any truth to that but never got around to researching about it. But you know.. yukyejang and bibimbap are just not the same without gosari but since he won’t eat them, I often ended up cooking without Gosari. So I was so happy that I chose to make gosari for this post because it was so yummy.. I forgot how good it was.

In case you are wondering where the myth came from – I researched a little bit on why one would say Gosari (Bracken Fiddlehead) is not good for men and there was nothing to support that.  The closest explanation I could find why was that uncooked bracken contains the enzyme thiaminase, which breaks down thiamine (vitamin b1).

Which means eating excessive quantities of bracken can cause beriberi – a disease that can make one very weak. But in any case, this is not at all a concern if you are going to cook the bracken because the enzyme gets destroyed when you cook it.

So don’t worry, just cook these three vegetables and enjoy them as a side dish or as part of bibimbap! 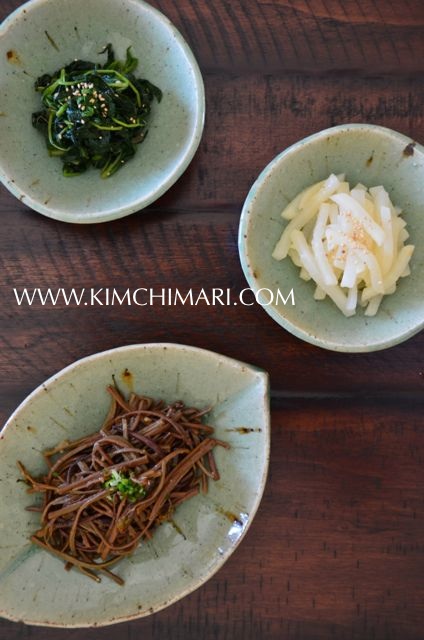 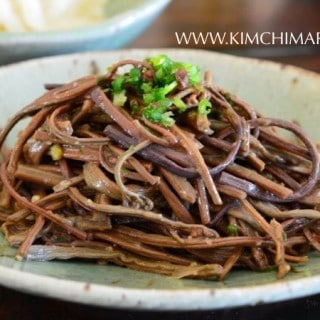