I used to think that sauteed burdock (woowong bokkeum) was one of those dishes that one could easily live without. Maybe it was because I never had much of it at home growing up or maybe it was because I never had one that was properly prepared from a fresh burdock. But my MIL (mother-in-law) changed all that. When she visited our home, she was so happy to find such great quality burdocks at our neighborhood market, she bought 4 roots the first time and then went back for more! I ended up spending an entire evening cleaning and julienning them.. and I was thinking to myself –‘why can’t she just buy the already sliced burdock packages? Is all this work worth it?’ But once I tasted the sauteed burdock made from these fresh roots, I could never go back. I may not get to make it as often as I would like but I make sure I take some time out every now and then to make this wonderful banchan which has now also become my daughter’s favorite.

Burdock or Woowong(우엉) is a really popular root vegetable in Korea and Japan (kobo). It has many health benefits and it is even treated as a medicinal herb in some cultures such as China and India. The common burdock is the root of a thistle (weed) which was introduced to North America by the European settlers and became an important source of winter food for Native Americans.

It is widely accepted that burdock root is a natural diuretic (U.S. National Library of Medicine and the National Institutes of Health). University of Maryland Medical Center also lists burdock as something that can be used for skin inflammations and wound healing. Other sources list that it can also help with diabetes, promote digestion and liver function (source: http://www.ehow.com/list_6671359_burdock-root-health-benefits.html) but science behind it seems to be a bit weak so I’m not sure about the medicinal properties but what I DO know is that it tastes good!

If you have access to a good oriental market, try to get a fresh burdock root. They are also sometimes sold in pre-washed, pre-cut packages which are not as good but will also work.

1. Peel the whole burdock (the root can be 2-3 ft long) and rinse. Cut off about 1 to 1 1/2 in off  the woody part of the thicker end and also about 1/2 in off the bottom end. Julienne the burdock by first slicing it at an angle (3 mm thick) and then cutting those into thin strips (2-3 mm wide). You can also use a mandolin but I found that it was actually easier to cut with a knife because the burdock is so woody and hard. Some people like to cut the whole burdock into chunks (cylinders) first and then slice and julienne them – as you see in the carrot julienne photo on the right. This works great for carrots but because the burdock is so fibrous, it is more tender if you cut it against the grain first and then slice it (as shown below).

As you julienne the burdock, immerse them in cold water immediately to keep it from browning and also to draw out some of the bitter taste. The water will become brown – that’s OK. Rinse the burdock in cold water and drain.

2. Heat 1 T of oil in a frying pan on medium high heat. Add burdock and sauté for a short time (less than a minute) until every piece is coated with oil.

3. Lower the heat to medium and add soy sauce, mirin and sugar. Sauté for another 7 min or so until tender. Stir them occasionally so that they are evenly cooked.

Woowong bokkeum is a great side dish that has a mild flavor and adds a light taste of  salty sweetness to your meal. 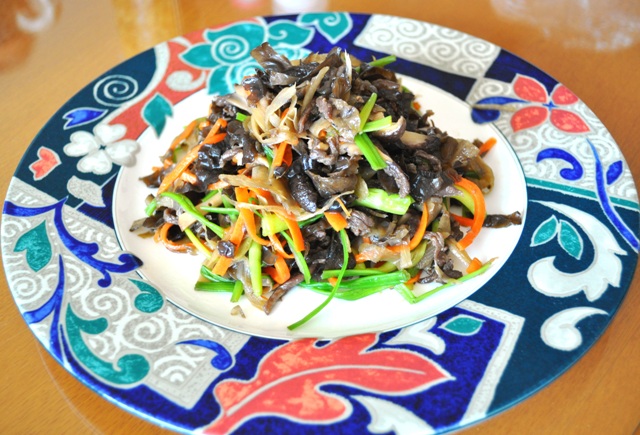