Here is another great Korean restaurant review post via my sister #3. I have always wanted to visit a temple food restaurant while I was living in Korea but just did not get to. I did take a few classes in temple food and that was a lot of fun. Temple food (사찰음식 Sachal Eumshik) are foods eaten by Buddhist monks in Korea. In the past, Temple Food was limited to monks and visitors who come to the temple but recently temple food has become quite popular as just health food to many Koreans. In my temple food classes, I have learned that many people have cured themselves of atopic dermatitis and other diseases by simply switching to vegan temple food.  My class instructor swore by it!!

Korean temple food is not only vegan and but also prohibits the use of garlic, chili pepper, scallions or chives, because these ingredients are considered to ‘stimulate the senses,’ which contradicts a life of abstention. You may wonder how such a cuisine can be delicious but surprisingly- it is. The cuisine focuses on allowing the ingredient to shine without letting the pungent aromatics take over the dish. So here it is –

In early Janauary, I was invited to lunch at Gosang – a Korean temple food restaurant – by my publisher. I actually owe the photos to her, because my 3-year old iphone suddenly went dead, and she was kind enough to take the photos for me – on top of paying for lunch.

The entrance resembles a Buddhist temple gate. This restaurant is not run by buddhist monks, but by a woman who started cooking food to cure her child suffering from atopic dermatitis. So the food centers around both Yakseon (medicinal) and Sachal (temple) food. Yakseon food is a type of cooking which uses medicinal herbs to enhance health.

We ordered the ‘jinsang’ course. The first thing we were served was –

The next course was a small bowl of rice porridge made of castor oil plant, yam, sweet rice, lotus root, and ginseng. Hmm… I could have done without it. As well as the salad that followed. The porridge had a non-descript flavor, and the salad seemed out of place.

But the next dish was delightful. It was deep-fried and glazed shitake mushrooms served on a bed of crispy rice cracker. If I didn’t know, I would have thought I was eating chicken.

The server then brought in a piping hot straw mushroom stew still bubbling on top of a small flame. It had lots of minari (Javan waterdropwort) in it. Minari is an aromatic herb that grows in water and resembles celery or Italian parsley. It’s a medicinal ingredient with detoxifying effects, but adds a good flavor to any dish. The fried tofu pouches were soft, plump, and delicious, but I no longer remember the filling. I think it was mushrooms. Should have written this article sooner….

Anyhow, the next dish was the Lotus Flower Platter Japchae.

An utter delight! Sliced pink-tinted lotus root, julienned burdock root, carrots, shitake mushroom, and glass noodles were plated with a lotus flower. It was the first time I’ve seen the inside of a lotus flower. But the flower is only for decoration. Burdock roots (U-eong, pronounced “woo ung”) is a root vegetable that only Asians eat. (JinJoo’s Sauteed Burdock Root ) It contains inulin and polyacetylenes : this means it is anti-diabetic, anti-oxidant, anti-cancer, anti-bacterial, anti-fungal, and on and on…. I guess this is why the owner served two similar dishes with burdock roots. Another U-eong japchae was served wrapped in lotus roots. Also very tasty and close to JinJoo’s mother-in-laws famous U-eong japchae.

The next dish was fried ginseng served with perilla seed sauce spread across the plate. It was a very modern and western style plating that I really didn’t care for. Of course, ginseng is well known for its health effects, but I really didn’t like this one as much as the two burdock root dishes.

As usual, the final course consisted of spicy banchans, rice and soup. This is where the owner violates the temple food rule. As you can see, many of the banchans were spicy. And broccoli is not a traditional Korean vegetable..

However, the soup was authentically temple cuisine. It was a brew of shitake mushrooms and kelp (dashima or more commonly known by the Japanese word ‘kombu’). The soup had a very nutty and comforting taste. It was amazing how a soup cooked without meat, fish or cream could be so good. But then, kelp was used as a taste enhancer in Korea for a long time before people started to manufacture chemical MSG. I heard that adding piece of dried kelp will make cooked rice also taste really good.

The rice they served was multigrain rice wrapped and steamed in lotus leaf. It looked good and healthy but just so-so in taste. Maybe I was getting tired of lotus by this time.

Dessert was omjia berry tea and a cookie. Omija (오미자) is not well known in the US but it is of the climbing berry family. Omija in Korean and Chinese characters literally mean, “5 flavor berry”. Its name comes from the fact that its berries possess all five basic flavors: salty, sweet, sour, pungent (spicy), and bitter. Schisandra chinensis is the binomial name and is also sometimes known as youth berry or magnolia vine. It is known to have various medicinal effects on respiratory, urinary and intestinal health. The cookie is made of various nuts and seeds with no flour or baking powder. It was absolutely delicious. I guess others share the feeling, because the same cookies were being sold at the counter. 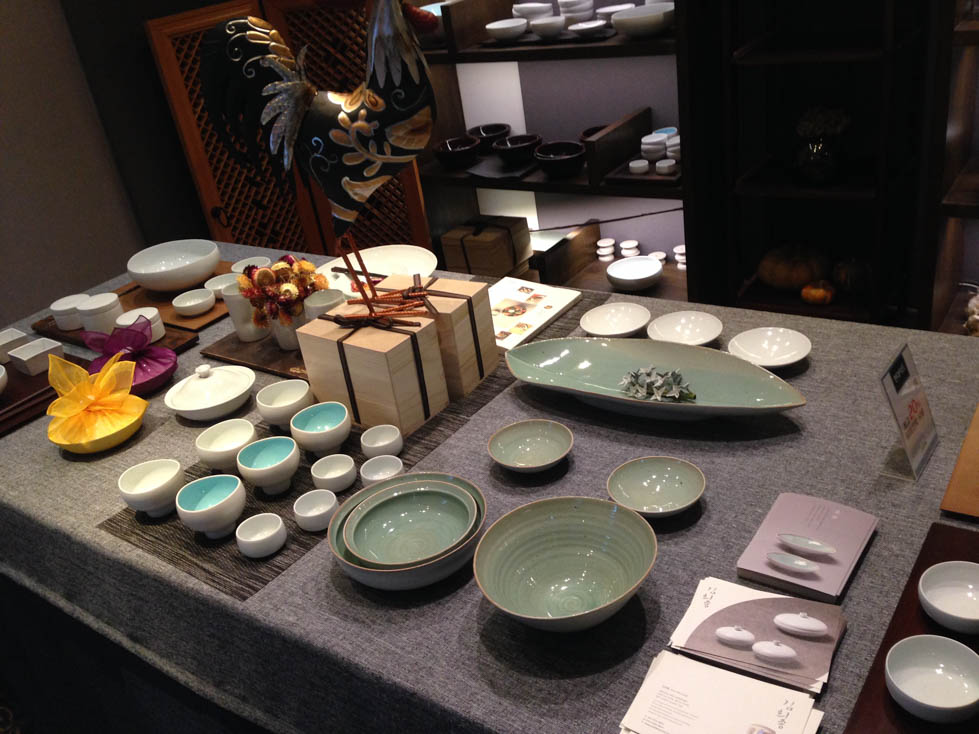 All in all, this is a good place to go if you want to taste Korean medicinal and temple food. It’s a slightly altered and modernized version, but it doesn’t lack flavor. It only lacks the usual spicy taste and pungent smell, which makes it very accessible to those unfamiliar with Korean food.

Hope you enjoyed my sister’s review of Korean temple food at Gosang!

My next post will be Spicy Squid Stir-fry (오징어볶음 Ohjingeo Bokkeum) so stay tuned!!

Have a great week,