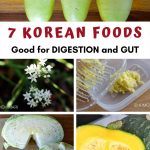 Koreans have accumulated great knowledge through hundreds of years of finding foods that heal. In this post, I share about Korean ingredients and recipes that help with digestion and gut including scientific sources that support the various claims.

7 Korean Ingredients for your Digestion and Gut

NOTE – I am not a medical professional so please seek the advice of a professional first if you are in pain or having urgent symptoms. And because each cause for indigestion or other digestive issues is all different, how your body responds to these foods may also be different. Some of the information below is solely based on home remedies that Koreans use or from my personal experience. But hopefully, these can help you in some small way.

If you have a warm body (you always feel less cold than others around you) then many of the warming foods like chives, ginger and sticky rice in large amounts may not suit you well so try a small sample before eating large amounts.

Well, I hope you enjoyed reading it! 😍

If you need any help with digestion or gut, I hope you will add these foods into your diet and enjoy all the health benefits they can give you.