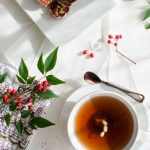 Sujeonggwa (Korean Cinnamon Ginger Punch) in the winter with some dried persimmon is simply a fabulous dessert drink that will also keep the cold away!

Sujeonggwa is a Korean dessert drink that is really simple and easy to make with no special ingredients needed. Both the cinnamon and ginger in Sujeonggwa (수정과) not only taste amazing but their anti-microbial properties make it a wonderfully smart and healthy winter drink because it can help to prevent colds. Of course, you are totally allowed to drink it any time of the year but just letting you know how it was traditionally. Ginger also aids with digestion which is why Sujeonggwa is served at the end of a Korean meal, especially at Korean BBQ restaurants where one is most likely to need a LOT of help with digestion.. hahaha.

Before green houses blurred the lines of the natural fruit seasons, Sujeonggwa (水正果) was typically served from late fall when persimmons were in season until end of winter (end of February in lunar calendar). The earliest origins of this Cinnamon Ginger Punch go back to Joseon Dynasty (1765) but the use of cinnamon and persimmons seem to have happened much later, around 19th century.

So.. you may have wondered or you may have not.. haha..why I posted Sikhye many years ago but never posted Sujeonggwa until now. Well, honestly I don’t have a lot of fond memories of Sujeonggwa growing up and never really liked it whether I had it at other people’s homes or even at restaurants. Why?? Well.. I think it’s just me but I do NOT enjoy really hot or spicy foods. My memories of Sujeonggwa when I was little was that it was not very pleasant. Often, I was with my mom at Seollal (설날) or Korean New Year’s, visiting different relatives’ homes and to pay respects to the elders.

Every time I enter a relative’s home, as I am taking my shoes off to go inside, I always thought to myself–

I mean, what else do I have to look forward to?? No other kids or toys to play with, no smart phones to see videos on……just me sitting there, listening to adults talk so all my thought was about food..

‘Boy, I really do hope they give us Sikhye..cause chances are their Sujeonggwa will be way too spicy for me.’

And sadly, most often than not, it was the oh so wonderful Cinnamon Ginger Drink!! As I am hesitating for a moment whether I should drink it or not, what excuse I would give to not drink it, my aunt or whoever will almost order me to drink it.

So I try it and YUCK! Way too spicy, my throat feels like it was burning and I tell myself that I will NEVER drink that stuff again!!

As I became an adult, the spiciness seemed much less and it became more tolerable. Still, it’s not something I usually choose to drink if I have a choice. Often times, it was also too cloyingly sweet.

Well, I am here to tell you today,  this Sujeonggwa is just right. It’s NOT too strong and spicy. Has the wonderful aroma and flavor of cinnamon and ginger in the perfect amount and is also not too sweet. I know sweetness is quite subjective so you are welcome to add more sugar to your liking and I will still like you and respect you so don’t worry!😍

How about serving this Korean Cinnamon Ginger Punch as a CHRISTMAS Dessert Drink!! Serve it cold or serve it slightly frozen like a slushy and everyone will love it!! It’s also HEALTHY too!

Here’s all you need to make Ginger Cinnamon Punch –

Why do you boil ginger and cinnamon separately?

Cooking ginger and cinnamon together diminishes each other’s flavor and aroma. So it is best to cook them separately first until you get the full flavor infused in the water and then mixing then last minute.

Which cinnamon stick to use?

My recommendation is to use Chinese cinnamon aka Cassica Cinnamon in this recipe to get the best flavor and color. Cassica Cinnamon sticks come in thick barks and is cheaper than the true or Ceylon Cinnamon. One bit of info about using Cassica is that it has high Coumarin levels which has a blood thinning effect when consumed in large quantities. Read more about Cinnamon here.

You can use whichever you wish. Many recipes will say to use light brown sugar for color. And that’s totally fine if you want to. Because I used Cassica sticks, I got this fabulous red color without using brown sugar.

If you like to make your Ginger Cinnamon Punch to have more of a spicy kick to it, you can reduce the amount of water to 3 cups each, total 6 cups. That should come out sweeter and spicier.

Well, hope the Christmas styled Sujeonggwa will get you into the mood of the holidays!! 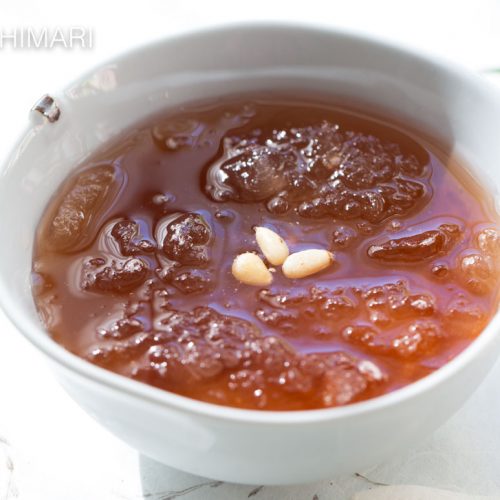 Alternatively, freeze Sujeonggwa for 3-4 hrs. Break big ice chunks and serve like a slushy. Cooking ginger and cinnamon together has a cancelling effect so it is good to cook it separately first until the flavor is fully infused into the water.