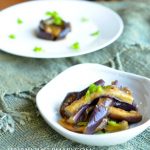 Steamed Eggplant (Gaji Namul) is made by tossing the steamed eggplant in delicious Korean soy sauce seasoning. It is healthy and simple to make.

Steamed Eggplant or Gaji Namul is not a dish when I liked when I was a kid. It’s because I was very sensitive to the texture of foods when I was little. Anything that’s too mushy or too chewy, too gummy or too gooey – my stomach could not take it. And most often than not, eggplants were cooked too long and it was just too mushy for my taste.

I have gotten much less picky about texture as I got older but I am still not a big fan of hwe(회)/raw fish/sashimi mostly because of its texture. I have no problem eating raw things – I love raw abalone because they have a very interesting texture when raw – slightly slippery but soft on the outside and chewy + hard on the inside. But raw fish, I keep chewing and chewing but it has a hard time going down my throat. In fact, it wants to come back out a lot of times.. 😉

However, after coming to Korea, I have learned that if the fish is absolutely fresh, the texture is much more firm and I can stomach it much better. But honestly, I am still not a huge fan of raw fish. 😉

Back to eggplants.. so ever since I visited the wonderful countryside of Italy’s Montepulciano several years ago, my thoughts about eggplant have totally changed. The vacation home we stayed in had its own vegetable garden and I got to cook and taste fresh eggplant picked right from the garden. It was just simply amazing!! Perhaps this is when my dream of combining farming and cooking started. The taste was so amazing that I wanted to share with people how absolutely different tasting a dish could be when fresh, fully ripened ingredients are used.