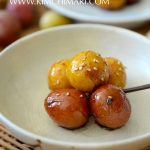 Korean potato side dish…this is probably what most people will call it, I thought. Not many will remember Gamja Jorim but that’s how it is called in Korean. Gamja means potatoes and this is a great simple Korean potato side dish that anyone, even YOU can cook at home. Gamja Jorim goes great with any Korean meal and is great for lunch boxes because it doesn’t have to be served warm. This ‘Korean potato side dish’ (unless you are referring to the string potato Korean side dish – which you can find recipe here) is often served at many Korean restaurants as a banchan that comes with your meal.

Story about Me and Potatoes – we go way back..

Now, I have thought long and hard and sadly (or may not to some?? haha) I have no story to share about Gamja Jorim. But I do have a story that comes to mind when I think about Potato Gratin. When attending middle school at the American Embassy School in New Delhi, India, I was taking French for my language class. And my wonderful French teacher decided to create a cultural experience for us and decided to have a fabulous French dinner party. It sounded just exquisite!!

So, each of us was assigned to cook a dish at home and bring to the party. I signed up to make Potato Gratin or Gratin Dauphinois. Sounds easy enough! Right?? Well…In those days in India, fresh milk was almost impossible to get regularly.. so my only option was to use powdered milk. Yes.. powdered milk.. It looked totally fine and beautiful when I put my assembled gratin in the oven.

But…when I took it out, something was not right..Why was their extra clear liquid floating around?? Where did the milk go?? And then there was some white curdled stuff in between the potatoes…sad sad sad..I was just sooo devastated. But it was time to go to the party. So I brought it to the party (I think we were being graded for attendance and participation) and I was just mortified when it was time to serve my dish. I will never forget that moment…trying to explain why the gratin came out that way in my very limited French. Thankfully everyone was totally understanding so it was all good.

BTW, I wanted to mention that I was asked by one of my readers recently for the recipe for this Korean potato side dish –  so here you go!!  This particular gamja jorim recipe is actually called Al Gamja Jorim 알감자조림 where “al” means “round ball or marbles”.  I really love this version because keeping the skin on means much less work and then it also adds a great chewy texture. I recently found these beautiful “sunrise medley” organic baby potatoes from a California farm called Tasteful Selections.

Thanks to my sister #1 for the idea and so now let’s get cooking on this Korean potato side dish with baby potatoes glazed in soy sauce reduction.

What is the best Potato to use for Korean Potato Side Dish (Gamja Jorim)?

The most common way to make this Korean potato side dish is by cutting a large potato into cubes and boiling in soy sauce and reducing it. The problem with this is that sometimes, if you overcook the potato and/or if you are using a creamy, starchy or floury potato like the common Russett or Yukon gold, it will start to become mashed potato jorim and that’s not really good.

If you are going to make a cubed style Korean potato side dish (gamja jorim), the I know different types of potatoes are available in different parts of the world, so I found this guide from this article very useful – “mix one part salt to 11 parts water in a measuring jug and add the potato. A floury/starchy one will almost always sink to the bottom of the jug, while a waxy one will float“.

My Newsletter
Print
5 from 4 votes 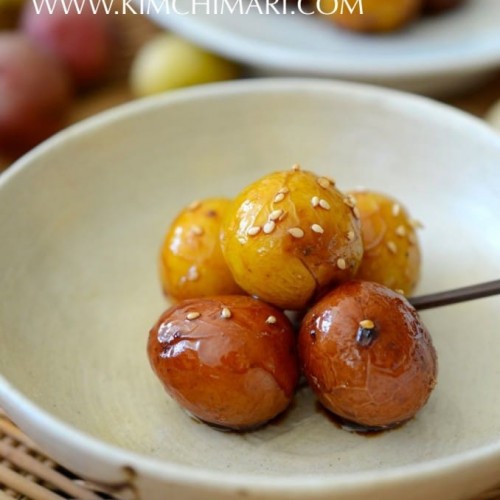 Great simple Korean potato side dish (Gamja Jorim) that is often served in a meal or in lunchboxes. Kids and adults will love it and is also quite easy to make.
Prep: 2 minutes
Cook: 38 minutes
Total Time: 40 minutes
serves: 3

Optionally, add onions or nuts.
Also, add 1 square of sea kelp (dashima) for extra flavor.
Store at cool room temp (up to 24 hrs) for best flavor. Store in fridge for up to a week.