Shabu Shabu (see my Shabu Shabu Korean Style recipe) and really good Japanese Nabe was one of the foods I missed the most when I first came to US some 20+ years ago.  Although these foods have origins in Japanese cuisine, just like how Pizza has totally become part of American food, shabu shabu and nabe have become very much a common food in Korean food scene. In Gainesville, Florida (where I lived as graduate student with my husband) there was no restaurant that served good Japanese or Korean at the time. In fact, in those days, there were very few Asian restaurants to begin with. I think Gainesville only had 1 Korean restaurant, 2 Japanese restaurants and a few Chinese restaurants in the early 90’s.  But definitely no restaurant served shabu shabu or good nabe (stew).

We sometimes drove for hours to Orlando or Jacksonville in search of some better Korean food, only to be disappointed a lot of times because it was not what I was imagining and hoping to taste. Kimchi jjigae that used kimchi that was not sour tasting and was seasoned with vinegar to imitate the taste, japchae/chopchae that was refrigerated and reheated, fish maewoontang that used frozen fish, I mean.. it kind of upsets me even now just to think about those bad Korean foods that we ordered and ended up paying with our precious grad student stipends. This is probably why I ended up learning to cook so many Korean dishes at home because there was no other way to eat them.

Now jumping 20 years ahead in time, in 2014, while I was in Korea, I was watching one of my favorite TV program on the Korean cooking channel Olive which was 오늘 뭐먹지? (Ohneul Mwo Meokji?). It means “What shall we eat today?” It’s a show hosted by two famous Korean celebrities: Sung Si-kyung (singer) and Shin dong-yup (comedian). They invite chefs and cooks from various restaurants to learn their famous dishes by cooking together. I liked the show because they cook all different cuisines – Italian, Japanese, Chinese, Korean,..and you also get to see these guys goof things up even though they try to really follow the instructions. And one time I saw this Mille-Feuille Nabe (Shabu Shabu) being made on the show and I really wanted to try making it at home.

This Mille-Feuille Nabe (also called Thousand Leaves Hot Pot) not only looks pretty and taste great, it also overcomes one downside of shabu shabu – having to wait while the food is being cooked at the table. And then wait some more until the next batch is cooked…Shabu Shabu done this way means everything is cooked all at once which makes it great for large and/or impatient families. 😉 Mille-Feuille Nabe (Shabu Shabu) is also great as a party menu because you can prepare everything ahead of time and just cook it right after your guests arrive. Recipe here is a modified and more accurate version as some parts don’t have any exact measurements and they also use some ready made sauces that are not easily available outside of Korea.

Above is an individual serving of Mille-Feuille Nabe (Shabu Shabu) with broth, garnished with fresh perilla and enoki mushrooms.

My Newsletter
Print
5 from 1 vote 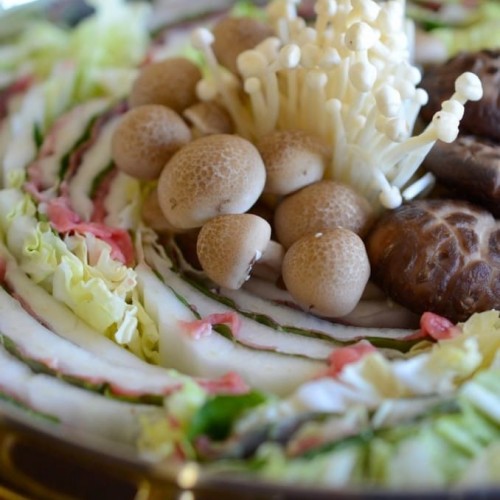