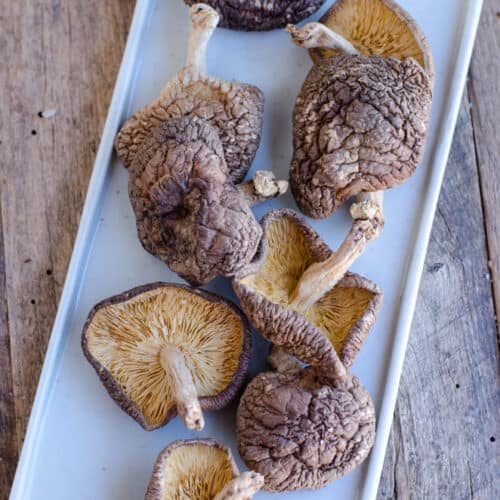 Pyogo Beoseot (표고버섯) or Shiitake mushrooms grow on the decaying wood of trees that are most commonly found in the warm, moist areas of southeast Asia. Pyogo mushrooms were so named because of their strong aroma.

They are one of the most popular mushrooms to consume worldwide. They are thick, large, light brown mushrooms with large gilled caps. The mushrooms are sold fresh or dried.

Dried pyogo muchrooms are more aromatic and have a solid, resilient texture so Koreans usually use the dried form. In temple food, pyogo mushroom is a great substitute for meat.

Where and What To Buy

If possible, try to buy Korean Shiitake dried mushrooms as I find they have the best flavor for Korean cooking. If you live in Korea, there are usually 2 kinds of Pyogo Beoseot - white 백표고버섯 and black 흑표고버섯.

Here's a picture that has the white and black Pyeogo together -

Some prefer the white one and is more expensive as it is more firm but there isn't a whole lot of difference in flavor.

Koreans use them to flavor broths, but also add to soups, braised dishes, noodles, fried rice, dumplings and more. It's also often used as a meat substitute in vegan temple food because of the dried mushrooms having a meat-like chewy texture.

Dried Shiitake should be soaked in water until fully hydrated. Soak in warm water for quicker hydration. The mushroom water obtained from soaking dried Shiitake can be used to make broths for Jjigae and Japchae.

Fresh Shiitake mushrooms will stay fresher for longer when stored in a paper bag in the refrigerator. Before using, make sure to remove dirt by wiping them with a damp, clean cloth.

Dried Shiitake or Pyogo Beoseot can be kept in the pantry for many months up to a year as long as the pantry is kept relatively dry and not too hot.

Recipes that use it: