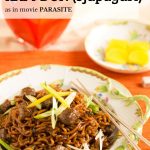 Ram-Don (aka Jjapaguri) is made by cooking Jjapagetti and Neoguri noodles together in one pot. It’s yummy chewy noodles in a Jjajang sauce that has a hint of spicy udon flavor. This dish appears in the movie Parasite and if you love Jjajangmyeon then you will love this combination.

Jjapaguri or Ram-Don is not something that grew up with. I heard about it a few years ago and basically it’s a genius combination of Jjajangmyeon (Chapagetti 짜빠게티) and Spicy Udon (Neoguri 너구리) with no broth but still all the yummy spiciness of the udon broth.

Personally, I cannot eat much of these instant noodles due to my gluten sensitivity but Chapagetti was one of my favorite instant noodles as a kid and is still my daughter’s favorite to this day. I always have to make sure I have a few when she comes home to visit.

I’ve posted a quick recipe of this many years ago in my 3 easy ramen recipes post but I felt it deserved a separate post – partly due to the latest craze of the Korean movie Parasite and how this dish appears in the movie but mainly because I wanted to share some improvements I made to the recipe.

Now, for some reason, this dish was translated as Ram-Don in the subtitle. I guess for Ramen + Udon?? But in Korean, it has always been called as Jjapaguri = Jjapa(getti) + (Neo)Guri.. and so now you know.

Koreans eat the most Ramyeon 라면 (instant noodles) in the world!

When Samyang Ramyeon was first introduced in the 60’s, ramyeon cost about 10 cents (which is about 2 dollars at today’s rate) while an everyday Korean meal like Kimchi Jjigae Baekban was 30 cents and Jjajangmyeon was 20 cents at the Chinese restaurants. So, back then, it was actually almost a treat for poor people.

Now, a half a century later, the cost of most ramyeon in Korea is still under 1000 won which is less than a dollar, whereas the average cost of Jjajangmyeon at restaurants is now about 5000 won (according to Korean government study). Which makes ramyeon a very cheap meal.  Thus, in recent years, esp. after the 70’s when these noodles started to get mass-produced, many poor students and workers lived on these instant noodles, eating them almost every day.

A cheap Jjapaguri (Ram-Don) dish topped with expensive Korean beef (hanwoo 한우) is a very interesting take by Director Bong. This dish symbolizes the rich Park family trying to glamorize a cheap dish – since just a plain Jjapaguri is not good enough for her son.

Now, is this realistic? Yes, definitely, to some extent. Koreans (especially the ultra-rich) love to put glamor in everything. BTW, honestly, the addition of the steak really does not work all that great in my opinion..but my addition of green onions makes it much better!

Anyway, note that although the subtitle only mentioned adding Sirloin on top, in Korean, the maid is instructed to add Korean Top Sirloin Beef cut (Hanwoo Chaekkeutssal 한우 채끝살) to the noodles. You may not think much if you just think – steak.. but in Korea, the price difference between Hanwoo (Beef from cow raised in Korea) and imported US or Australia beef is pretty huge.

Korean beef is usually about more than twice as expensive as imported beef. According to the Korean Agricultural dept’s study (2013-2017), a Hanwoo Short Ribs cost ₩4791 won per 100g whereas US frozen ribs cost ₩2294 which is less than 1/2 the cost. So naturally, Korean Hanwoo beef is eaten only on very special occasions for most people in Korea unless you are crazy rich like the Parks in Parasite and can easily throw the meat into any dish.

FYI, If you want to learn more about Korean beef cuts, I have a great post here.

So, to stay in line with the ‘ridiculousness’ of this dish,😜 I decided to use the most expensive 🤑plate I have which is this beautiful Hungarian hand-painted dish by Herend (inherited from my mother-in-law) along with our silver chopsticks. My mother-in-law usually lives a very frugal life but she likes to buy the BEST when she travels. And so now, I’m the lucky beneficiary of these beautiful dishes she bought on her trip to Hungary many many years ago. Thank you, mom! 💕

To serve this very cheap Ram-Don in this very very expensive plate.. it’s pretty but kind of ridiculous right?? LOL.. 🤩😍

☆ Did you make this recipe? I hope you can give me a 5 star rating below! 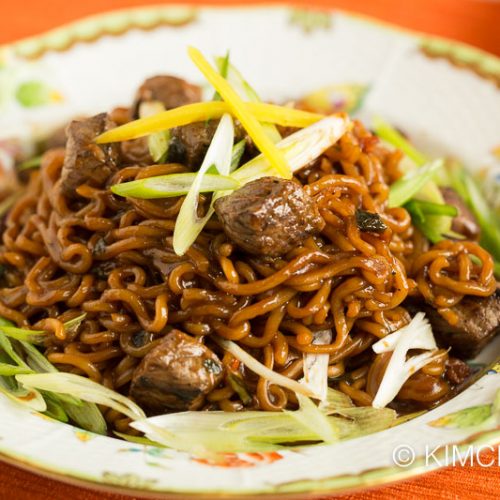 Ram-Don or Jjapaguri recipe is made with 2 Korean instant noodles. Just as how it appears in the movie Parasite. So quick, easy and delicious!!
Prep: 3 minutes
Cook: 10 minutes
Total Time: 13 minutes
serves: 2

Author: JinJoo Lee
Course:noodles
Cuisine:Korean
Keyword:instant noodles, ramen, ramyeon
KoreanCategory:Myeon(면)
Did You Make This?I love seeing what you’ve made! Tag me on Instagram at @Kimchimari or #kimchimari and don’t forget to leave a comment & rating below!