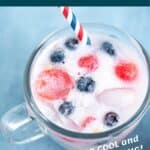 Korean watermelon punch aka Subak Hwachae is a wonderful way to cool down in the summer! Choose one of my 3 variations to serve as dessert or summer drinks with your Korean meal.

Korean Watermelon Punch or Subak Hwachae 수박화채 is a very simple yet refreshing way to enjoy watermelon but with a little extra flavor. As with many other dishes, Koreans love to highlight the full flavor of the ingredient without overpowering it with other ingredients.

You may think that just adding water, sugar and maybe milk then ice is not much of a recipe but it really makes the watermelon even more refreshing and yummy.

Subak 수박 is Watermelon in Korean so that’s simple. The Hwa 화 in Hwachae 화채 literally means flower 🌸 and Chae basically means ‘edible plant’. Hwachae originally refers to the traditional punch/drink where Omija syrup is used to make the base drink and either edible flowers or fruits cut into flower shapes are added on top.

But over the years, Koreans have made variations where different fruit other than Omija is used. BTW, Omija is my absolute favorite drink and I sell the Omija syrup (cheong) on my shop so you can buy it there if you’d like.

When I was growing up, Subak Hwachae was the quintessential summer drink to cool down in the summer. There were no air conditioners installed at homes way back when so I probably had either this Korean Watermelon Punch drink or Misugaru Drink almost every day.

And so just among family, we just scooped out the watermelon with a large spoon and then sprinkled some sugar on top and added lots of ice. By the time you are about done with a bowl of it, you have a fabulous drink made from watermelon juice + sugar + ice that seals the final cold flavor punch 🥊 (haha) at the end!

Another fun memory that comes to mind with watermelons and childhood is one with my brother. I’m sure you know that the sweetest part of the watermelon is the center part of the melon. And watermelons were usually cut into half and stored in the fridge as halves until you are ready to eat. Now, it’s one thing if you are going to make punch with it but if you are going to slice it, then it would be a common courtesy that one would eat a slice of it – NOT just the center part of the whole half of a watermelon!!

BUT, my brother was sneaky and lazy… he would always scoop a few spoonfuls out of the watermelon RIGHT from the CENTER!!!

And he smiled back and me.. “먼저 먹는 사람이 임자지” – basically telling me, you snooze you lose or in other words, the one who eats it first gets whatever they want!! I love my brother but he can be soo annoying at times 😝😡 HAHAHA

How to make Korean WATERMELON PUNCH

Just scoop out or cut the watermelon into cubes, add a whole bunch of ice and sprinkle some sugar. I would say about 1 Tbs per 1.5 cups of watermelon. You may say it’s too simple to be a recipe but if you haven’t had it this way, you should try it, it’s extra refreshing and thirst-quenching.

Add blueberries to the milk + cider combination and you have a RED, WHITE and BLUE patriotic 🇺🇸 Watermelon Punch! 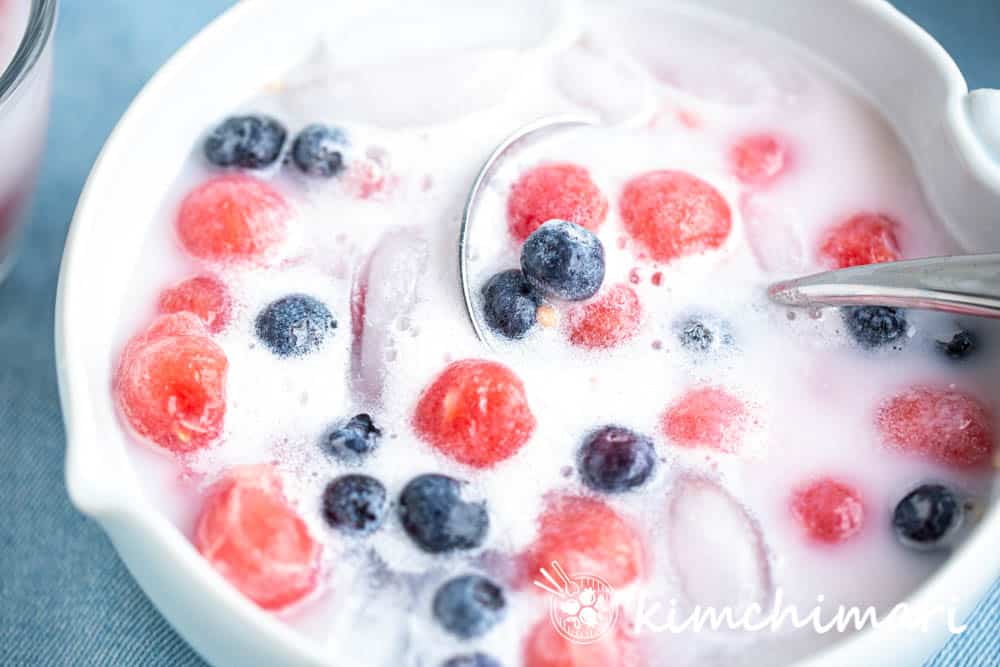 Serve with some Red White and Blue straws like below which can also work like a toothpick to get the watermelon balls.

How to serve and store Korean Watermelon Punch

Serve the watermelon punch either as a refreshing snack in the summer or as a dessert drink at the end of a meal. In Korea, Subak Hwachae is usually served in a small bowl (instead of a cup) with a spoon for each person. People either drink from the bowl and/or use the spoon to eat the fruit – like below.

Storage – this drink can be stored in the fridge for a day or so but you will lose any carbonation if there was any cider added. You can always add a bit more milk and cider to liven it up if you’d like once it’s stored.

Well I hope you can Stay cool with these wonderful refreshing punch drinkl!! 🍉🍉

My Newsletter
Print
No ratings yet 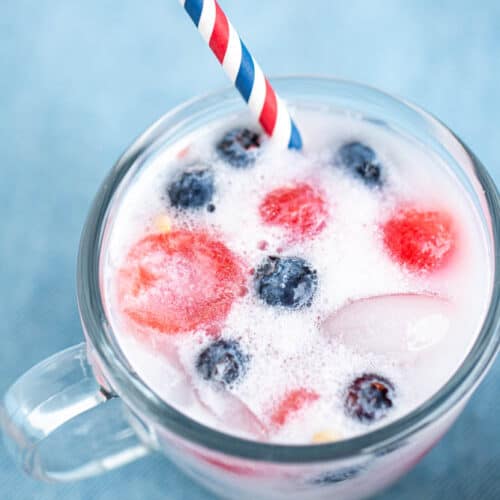 Korean Watermelon Punch is a great refreshing summer drink or dessert that you can easily make at home with just a few ingredients!
Prep: 5 minutes
Total Time: 5 minutes
serves: 4

Author: JinJoo Lee
Course:Dessert, Drinks
Cuisine:Korean
Keyword:punch, watermelong
KoreanCategory:Che(채)
Did You Make This?I love seeing what you’ve made! Tag me on Instagram at @Kimchimari or #kimchimari and don’t forget to leave a comment & rating below!