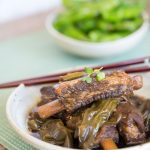 Spicy Soy Pork Ribs with Shishito Peppers or Dwaeji Galbi Jjim is the latest recipe that I developed for the Instant Pot.  I used a lot of shishito peppers because our family have really fell in LOVE with these peppers lately (especially my daughter) and they are in full season right now.

In Korean, we call Shishito Peppers, Kkwari Gochu 꽈리고추. The flavor of this pepper is very mild with almost no heat and yet there’s still that hint of lovely peppery spiciness with a slight sweetness that makes these peppers so addicting. The skin is also thinner and more tender. The other day, I just stir fried it with a little bit of oil and some of my apple lemon soy sauce and it came out really delicious.

A note about its Korean name and Jorim vs Jjim:

Back in 2011, I posted Spicy Soy Braised Pork Ribs with chili peppers and called it Spicy Soy Braised Pork Ribs or Dwaeji Galbi Jorim because that’s what we called it in our family. Many Koreans use the words Jorim 조림 and Jjim 찜 without a lot of distinction and I am certainly guilty of that (as in my post in 2011). However, I feel I need to make a little correction before we go further. Let’s look at the difference of Jorim vs Jjim in more detail.

According to the International Korean Menu Guide (published by Korean Food Foundation) in 2012:

Jjim is called Braised Dishes and defined as “dishes made by slowly braising or steaming seasoned meat, seafood or vegetables in a sauce”.

Jorim is called Glazed Dishes and defined as “meat, fish and vegetables seasoned and simmered over a low flame until sauce is reduced to a glaze”.

Jjim (찜; Korean pronunciation: [tɕ͈im]) is a Korean cuisine term referring to dishes made by steaming or boiling meat, chicken, fish, or shellfish which have been marinated in a sauce or soup. (source wikipedia)

Jorim (조림) is a simmered Korean dish, made by boiling vegetables, meat, fish, seafood, or tofu in seasoned broth until the liquid is absorbed into the ingredients and reduced down. (source wikipedia)

In my opinion, both of these definitions are not completely correct. Mainly I have 2 issues with these definitions. I know I have used the term Braise to refer to Jjim dishes in the past but I realized after my culinary techniques class that this is not completely correct. The term Braising is a mixed cooking technique of dry heat (searing in pan) and wet heat (boiling with liquid) but in Korean Jjim, meats are never seared before they are cooked in liquid so it’s missing the dry heat part of braising.

2nd issue is with Wikipedia defintion of Jjim. Jjim is not just simply steaming or boiling seasoned ingredients in sauce or soup but there is a “slow cooking” element to Jjim. Although the word Jjim literally means “steamed dishes”, it has come to refer to dishes that are SLOWLY boiled/simmered like Galbi Jjim, Suyuk that are cooked to perfect tenderness through the ingredient of time.

So I know this may be too much info for some of you but defining and categorizing properly is just something I like to do. 😝I should remember to include this in my future dream cookbook… haha.

Right, let’s get cooking, shall we?

BTW, in my past non-IP Dwaeji Galbi Jorim recipe, you will see that pork short ribs needs to be cooked for 75 minutes which is fine. But with my instant pot, I was able to cook my Spicy Soy Pork Ribs recipe in just 25 minutes!! And of course, it tasted just as delicious if not better – I know I am saying this for the 3rd time in a row for my Instant Pot recipes but that’s the truth. Recipe is basically the same (reduced water amount) except I added a whole bunch of Shishito Peppers (꽈리고추 Kkwari Gochu) because my daughter is in love with these lately. 😍

If you don’t have an Instant Pot, you should consider getting one. The one I have is the Instant Pot Duo 7-in-1 6 Qt. 🙂 You know that I won’t recommend it unless I really like it. They also have a new 3 qt size if you want a smaller one. Go to my store and look under Cooking Tools for a link. 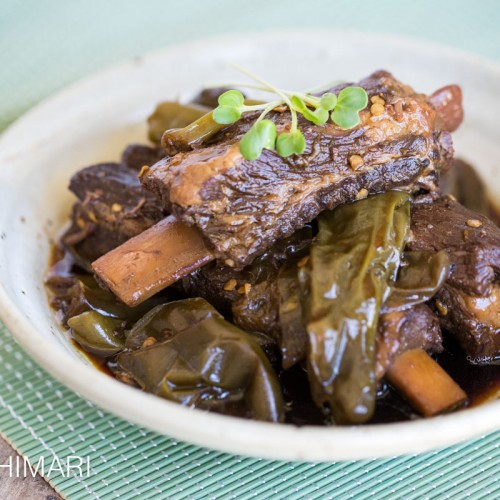 Spicy Soy Pork Ribs with Shishito Peppers or Dwaeji Galbi Jjim is the latest recipe that I developed for the Instant Pot. So simple, easy and a totally satisfying dish that can be also a one dish meal when served with rice.
Prep: 5 minutes
Cook: 25 minutes
Total Time: 30 minutes
serves: 6

** Most of the soy sauce is in the sauce but you will not be eating most of it. Sodium level is a very rough estimate of what you will be consuming.